With the introduction of systems without the familiar blinking lights and toggle switches, Data General had to create an alternative method of data entry and interrogation of data and registers that the traditional physical consoles offered and this was achieved by the creation of the Virtual Console (VC).

The VC allows you to interact with the computer through the system terminal connected to the CPU’s on-board asynchronous communications interface. Simple commands which you enter on the terminal keyboard allow you to examine and/or modify processor registers or memory locations; start, stop, and continue program execution; and, initiate a program load from a selected device.

On power up, the computer performs a self-test. After a successful completion of the self-test, the following message appears on the system terminal:

OK followed by !000000 indicates that the self-test ran successfully. The digits following the ! are the contents of the program counter; on power-up, they are all zeroes. The next ! is the VC prompt; it tells you that the virtual console is ready to accept input.

In addition to power-up, the VC is entered when one of the following occurs: 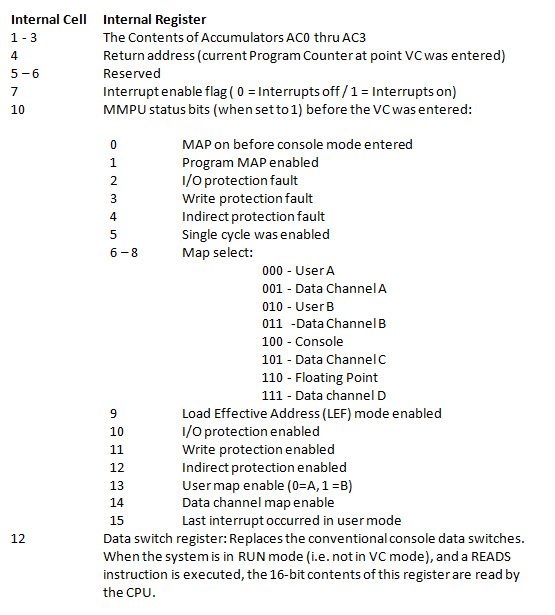 In order to examine or modify any cell, you must ‘open’ it. Opening a cell causes its contents to be printed, in octal, on the terminal. To open a cell, use one of the commands listed in the table below. The VC will respond only to octal numbers and upper case letters.

NOTE: In the above table, the term ‘current cell’ means the last cell that you opened.

When you open a memory cell, the VC interprets the address as a 19-bit physical address. You do not have to type leading zeroes. All you have to type is the physical address in octal representation. For example, if you want to open location 5, type 5/. If you want to examine the top location of a system which contains 1Mbyte of memory type 1777777/.

Once you have opened a cell, you may change its contents by simply typing (in octal) the number whose value is to be placed in the cell. Terminate the expression with a Carriage Return, Line Feed or New Line. Note that if you type Carriage Return the next cell will also be opened. This is convenient when you need to enter data into several consecutive locations.

The VC has the following function commands. All commands must be typed in octal numbers and upper case letters:

Typing I causes the CPU to issue an I/O Reset command and clear the MMPU.

This is the same as entering 100027 on the front panel switches (of say a Nova 3) and toggling the Program Load switch.

If you attempt to open a non-existent memory cell, the 16-bit contents of the cell printed in octal on the terminal will be all 1’s. You can verify that this location does not exist by entering a new value containing 0’s in the cell and then re-opening it. If it still contains all 1’s, the location is non-existent.

If you attempt to open a non-existent internal cell, the terminal will print random and meaningless data.

A CPU may fail its power on tests, if these are not terminal (in the sense that the CPU is able to execute microcode and the asynchronous interface is as least able to transmit data) then you may receive a partial response from the self-test, for example just the O. In most cases you can halt the self-test and receive a VC prompt by pressing RESET on the front panel – with a bit of luck you will get a VC ! prompt.

You can then start to use the VC for fault diagnosis – for example you can use the VC to look at the memory contents as well as write a value into memory and read it back if you suspect that a memory fault was encountered.

This site uses Akismet to reduce spam. Learn how your comment data is processed.